Design a site like this with WordPress.com
Get started

It has been noted and debated before that VMS might have annotations that indicate what color should be used in a few images. The first time I encountered this idea was on René Zandbergen’s site.

EDIT: It has been quite a while since I originally wrote this and I saw that a few other annotations were added, but I think my points remain valid.

Apparently, there are only 3 colors annotated, red, purple and green (EDIT: and maybe yellow too). Most are in Latin alphabet, although in VMS there is always an exception!

Let’s start with a relatively easy one:

In f1v there is a ‘g’ written under a green colored leaf. Assuming that the ‘g’ indicates that the leaf should be colored green, and we are assuming that for now, and assuming that VMS was conceived in Europe, locks us into a very certain language phylum, namely Germanic. I will probably write more about languages in a later post, but according to Berlin and Kay Theory (it is really famous, look it up!), green is one of the earliest colors in a language, preceded only by red and sometimes yellow. As a result the word for ‘green’ changes dramatically from phylum to phylum. This, of course, does not imply anything to the script itself!

Let’s go for a tougher one: 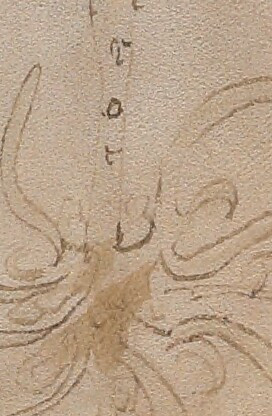 In f4r we find ‘rot’ written above a root system crudely painted red. Some say this is not ‘rot’ at all (EDIT: If memory serves Nick Pelling was one of them), so I snipped some letters from f116v:

Seems like a different hand, but pretty close to me. Again, ‘red’ is a very early word and ‘rot’ means ‘red’ in German, so it looks consistent with the previous thought about the ‘g’.

A tougher one yet, f9v.
Here we have two proposed annotations.
The first:

‘g’ just outside the top right flower, of what was identified as a Viola Tricolor (EDIT: I cannot find who identified it first). It seems that this does not fit. The Viola Tricolor flowers have no green color. At first I thought this might be an attempt to draw the flower from the backside as the lower flowers on the same page, because the stem is green: 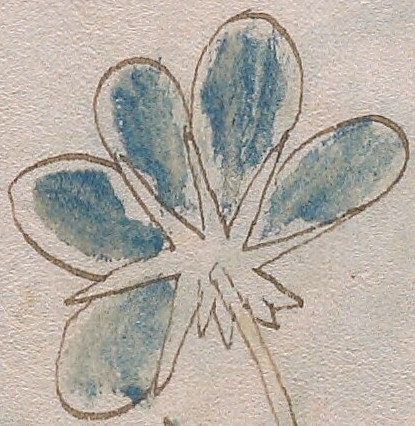 A photo of Viola Tricolor backside here: https://citysonnet.wordpress.com/2017/03/22/backside-flowers/
But, now I think it is not exactly color annotation, but has to do with color. The ‘g’ is written outside the flower, which is not the case for all other proposed color annotations in VMS. As stated in Terry Beverton (2011), Berverton’s Complete Herbal: A Book of Remarkable Plants and Their Uses, which is base on Nicolas Culpeper (1653), Compleat Herball, p. 332 : “The flowers have also been used to make yellow, green and blue-green dyes”. So it may be that this is indication of the use of the flower.
(EDIT: It could also be just a mistake since the lower right petal is mixed with blue and yellow giving a greenish color)
Next, there is the much debated ‘por’, ‘p’, and ‘r’, on the top left flower: 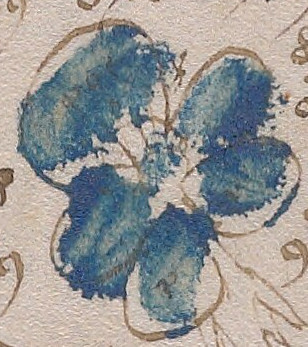 From the little German I know, I would have said that this not  German because purple in German is ‘lila’. So maybe it is Latin ‘purpura’?
Then I have found, in William Jervis Jones (2013), German Colour Terms: A study in their historical evolution from earliest times to the present, p. 354: “NHG lila is first attested in the 17th century”. Way to late to appear in VMS. A quick search in an ENHG dictionary tells me it was ‘purpur’. So we are still good on the Germanic language idea. It bothers me that it looks like ‘por’ rather than ‘pur’. Could that be a hint? Or a mistake by the authors? Or a mistake by me?

We are back to two easier ones:
In f20r there is a ‘p’ near the stalks of the plant. Since it is also close the the red painted root system and some suggest that it is an ‘r’ I thought it might be ‘rot’ again. But this does not seem like ‘r’ to me at all. 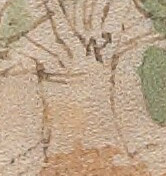 Then I noticed the rather crude attempt to paint the stalks purple. so ‘p’ looks like a good fit. 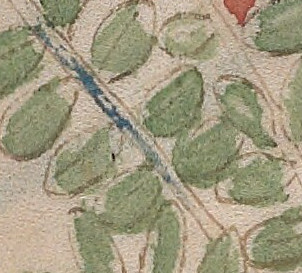 Last of the Latin letters is f32r with a ‘p’ on the lower right flower. The flowers are painted purple again so ‘p’ fits nicely here too. 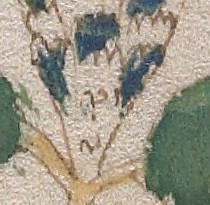 Some suggest that there is also an ‘r’ or a ‘v’ below it, but I think this is a detail of the flower as in the lower left one:

And now for the fun part: 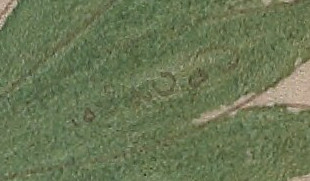 In f2r there is some Voynichese under green paint. According to René’s website it says “ios an on”. I am not sure about that since the handwriting is unclear. I am not even sure those are 3 separate tokens, I actually think they are not. However, I think there is little room for doubt that this is indeed Voynichese. If so, I think there is a huge significance to this, though I have not seen a thorough discussion about it.

EDIT: For the sake of completeness, I have added a short discussion about the other annotations:
In f1v there is a ‘j’ under yellow paint. It is so thin and faint that I am unsure that it is not an artifact of the scan (Note to self: It could be interesting to compare the characteristics of the color annotations).

But still a ‘j’ could make sense. The first thing that comes to mind is the French ‘jaune’. But turning to Berlin and Kay again, yellow is yet older than green so it might go up in the language tree and be common to more languages. So it appears that the etymology goes to Latin ‘galbinus’ going back to reconstruction of Proto-Indo-European ‘gel-‘. Although Wiktionary claims it is “unrelated to German gelb”, checking for the etymology for ‘gelb’ takes us back to reconstructed Proto-Germanic ‘gelwaz’ and then back to Proto-Indo-European.
Same source or not, from German ‘gelb’ to English ‘yellow’ and from Latin ‘galbinus’ to French ‘jaune’, it looks like ‘g’ and ‘j’ are pretty much interchangeable.

In f2v there is ‘fa’ or ‘fo’ written above the second paragraph. It was noted on René’s website before I wrote the original post, but I discarded it. It does not seem to be related to the image at all. Unlike all other annotations, except the ‘g’ on f9v, it is outside the image, and unlike the ‘g’ on f9v it is further away. Maybe I will write about it in a later post. 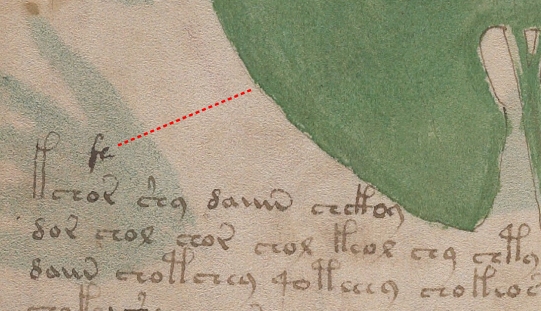 In f7r there is ‘rot’ along a red colored root. Pretty self-explanatory at this point. 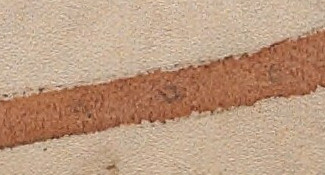 In f29r there is another ‘r’ on a (rather faint) red colored root.

In f99v there is what seems to be Voynechese ‘qo’ on a red colored root. This only strengthens the conclusions above. 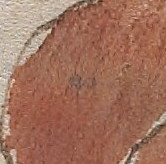 I read Erik Kwakkel’s medievalbooks and the latest post, The Architecture of the Medieval Page, was quite interesting.

Specifically, I was interested in looking into any preparation and planning stages of the writing in VMS.

Most of the VMS have none. No dots, no gutters, no lines or grid. As Koen observed in The Voynich Temple, A Marginal Paradox (Layout Continued), in pages with images, even if only “marginal” images, the text looks secondary to the image.

“Recipe” pages have a some margin at the bottom, but not a designed one, for example f113r: 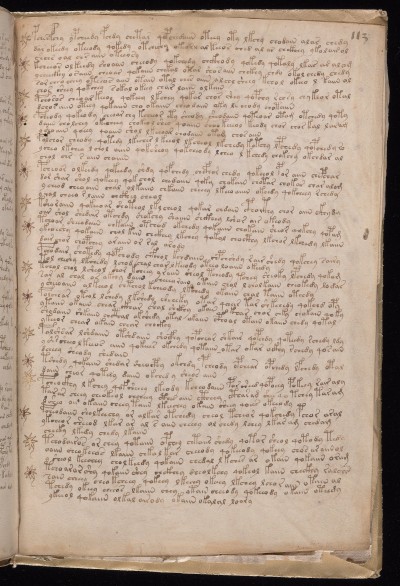 Other text-only pages have margin wide enough for comments, but again, not designed. There are actually some marginal comments. On page f66r for example, notice that the margin is not strongly aligned:

What text is planned?

In all of the “circular” image pages, Zodiac, star maps, lunar phases and such.
There are 3 types of text on those pages, only one of them planned.

This is the text that integrates as a part of the image. Usually, along the circles themselves, but also along paths or inside text boxes within the circles. For the obvious reason that this text should fit the image boundaries, it is very much planned. This is the only planned text, with one possible exception which I’ll describe later.

The stars, characters of the Zodiac and other image elements are sometimes labeled. These labels follow the general direction of the image but do not have marked positions.

Some of these pages have additional text outside the image. In 6 out of 8 of those the text appears above the circle, 1 to the top right and 1 below. None of them planned.

As with anything in VMS there is an exception. On page f67r2 there is some text that might look as an additional text below the cicle. To my untrained eye it looks like an image text for a few reasons:

As Erik wrote: “page design is usually reflective of how the book would be used”. In VMS the lack of margins that may be used for comments indicates it was not used for education. It is also not designed as a book of entertainment.
The design supports the idea that VMS was intended as a scholarly body of information.

This is yet another VMS blog.
To eliminate ad hominem in advance, I do not hold a degree in any relevant field to VMS research.
Having said that, I do hold a degree in Computer Engineering and I have some experience with Machine Learning, and I would very much like to use those tools to crack the VMS. Alas, I do not have enough time or compute power available at the moment.
Nonetheless, I am very interested in everything VMS and history in general.

I use this blog to write down my ideas every once in a while. All idea and realizations are my own unless stated otherwise, and should be taken in this context.
If I have not given enough credit to anyone, please tell me and it will be corrected.
Please feel free to comment or write me anything about VMS.

What not to expect?

Solving the VMS. That depends on what you define solving to be, but for me it is:
First, understanding the text – I do not think we have enough consistent text for it.
Second, understanding the origin of the MS – maybe there is some chance at that.

This is not a scientific work, do not treat it as such. The ideas I bring up may, and most probably have been observed many time before. This is more of a public notebook. Please do not copy it or use it in any publication without my permission.